Gamers have a bit of a reputation for being an antisocial group of people. But the fact is that there is little to no truth to this. In fact gamers get some of the biggest events on the planet. In case you aren’t too familiar with the annual gaming events that take place you can find a list of the biggest events here as well as information about when and where they take place.

PAX started out as an event that was created mainly for games and gamers back in 2004. It started out as a fairly small event that then doubled in size each and every year up until it reached the massive size that it is today. PAX originated in Sea 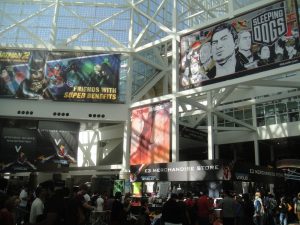 ttle but eventually expanded to PAX East which is held in Boston each year, the original PAX in Seattle is now referred to as Pax West.

Even though PAX has expanded to be about alot more than just gaming during later years, the main focus is still on games. Plenty of games offer exclusive content for attendants, League of Legends often offer exclusive skins at PAX for example, these skins are impossible to get any other way. Pax West takes place in the start of September while Pax East takes place in the middle of March.

E3 is the abbreviation for the Electronics Entertainment Expo and is one of the biggest gaming events of the year. A whole bunch of big publishers of video games choose to announce upcoming titles at E3 and you can often try out games that are currently in development. When a new console is in the making you can usually catch a glimpse of this as well at E3. In 2017 E3 will take placein the middle of June, the 13th to the 15th to be more specific and will be in Los Angeles, California. So if you like video games and cutting edge technology you should most definitely visit E3 as you can get your fill of both things.